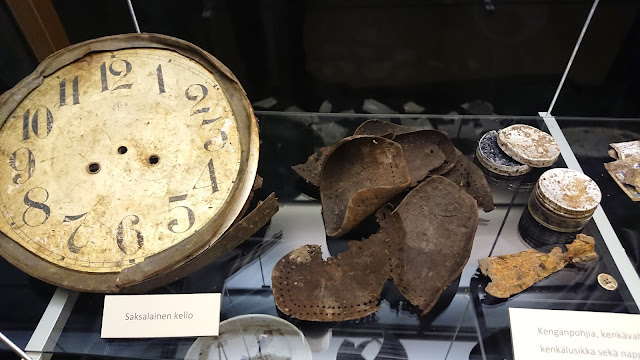 Last year we finally begun the archaeological excavations of the Luftwaffe airfield in Pori by organizing an educational excavation together with the high school students of PSYL. The excavation was a part of a high school history course, during which the students did not only participate the excavation, but also cleaned and studied the finds before planning a small exhibition at Satakunta Museum. As the exhibition now comes to an end, I wish to share a few photos of the display. Some of the personal items discovered from the area, including Junghans clock. Exhibition, called simply Mullankaivajat due to the grant that made it all possible, was on display at the museum from September 25th, 2020 to January 3rd, 2021, although it technically remained closed to public for the last weeks due to coronavirus restrictions by the city of Pori. However, the exhibition gained quite a sizable audience during autumn and was met with positive feedback by the museum visitors and staff alike. The co
Post a Comment
Read more 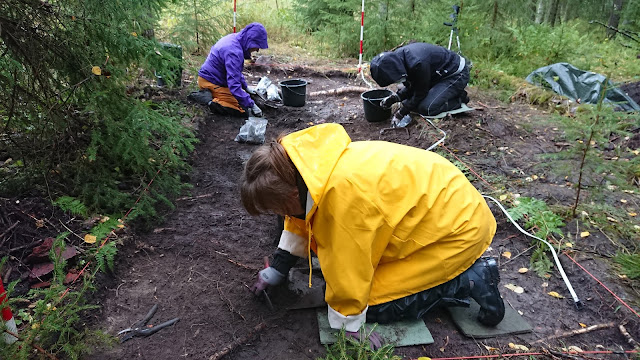 After the educational excavation organized for the students of PSYL, our team was joined by a group of participants through Pori adult education centre. With their kind assistance, we were able to continue excavating the Luftwaffe Airfield and to finish the first field season of Feldluftpark Pori research project. While the finds are currently going through some cleaning and cataloging, a few words can be shared of the excavation itself. Even if the weather was not always favorable, the work continued! With this new group, we continued the trench that had already been started with the high school students earlier – that being the unknown German barracks building at the very outskirts of the base. We also opened up a larger test trench over a German trash pit, with hopes of getting a larger sample of wartime German belongings. As the main excavation trench was already almost finished, it didn't take long for us to finish the job. One of the main goals for us was to empty the "
Post a Comment
Location: Pori, Suomi
Read more 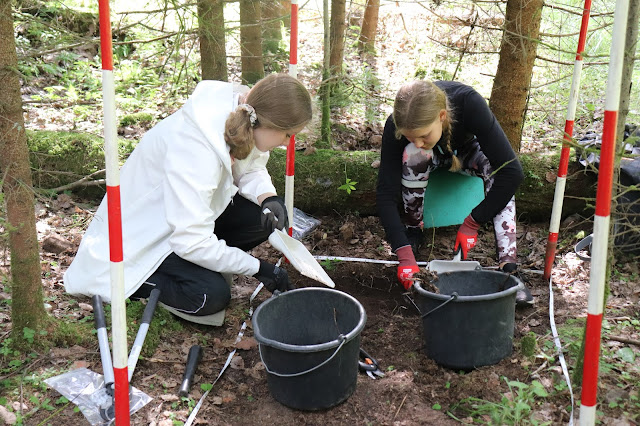 And so it began – the first archaeological excavation of Feldluftpark Pori research project! Last year the Finnish Cultural Foundation kindly granted us Mullankaivajat ("Soil Diggers") grant to organize an educational excavation together with the high school students of PSYL. After an uncertain start, due to changing covid restrictions, a group of ten students, two archaeology students and I headed to the site that once used to be a part of the Luftwaffe airfield in Pori. This was the first group to properly excavate what remains of the Luftwaffe airfield. The site selected for the excavation was a German built barracks building, which first appears on the maps of the airfield in 1942. While the purpose of the building was unknown, it lied relatively close to buildings such as a canteen, stables and garage. The barracks survived the war and wasn't among the buildings that Germans destroyed while retreating from Pori in September 1944. In November 1944, the building is de
Post a Comment
Location: Pori, Suomi
Read more 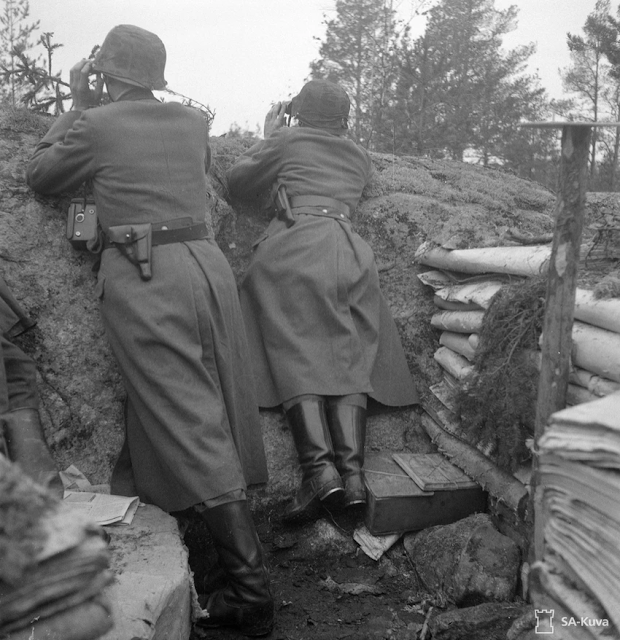 Another peculiar and important excavation trench of the 2020 Hanko field season was placed over the "Hillock of Death", which is an ominous name given for a hillock where 17 Finnish soldiers lost their lives. On the hillock lied observation and listening posts and those unfortunate enough to peek too far from the safety of the trenches were shot from the Soviet side. SS-Kriegsberichters observing the frontlines in 1941. Photo: SA-Kuva. What's peculiar about the site, is the fact that the observation post could possibly be linked to a photo of German SS-Kriegsberichters in 1941 (above). While the photo as taken at the Hanko Front, the exact location of the observation post in question is unknown. We approached the site by preparing a four meters long test trench over the remains of an old observation post. Our goal was to create a section , through which we could observe the shape and depth of the features left behind by dismantled constructions. However, the plans changed
Post a Comment
Location: Hanko, Suomi
Read more 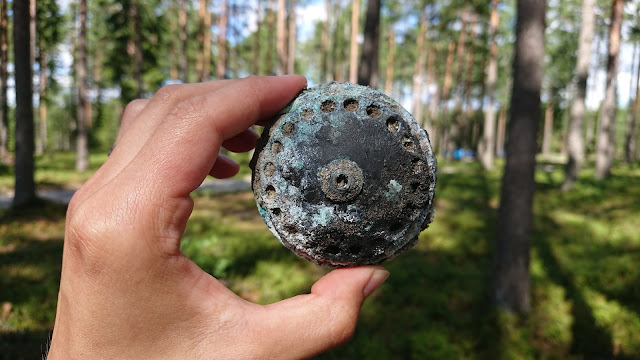 The biggest excavation trenches of the 2020 Hanko field season were placed within and outside a dugout called "Hamster's Nest" ( Hamsterbo ). The site was selected due to a story surrounding it, as the dugout was mentioned by a Swedish volunteer soldier Åke Kretz in his book Frontvardag . In the book, Kretz not only describes the interior of the dugout, but also it's fateful end – a story which we wanted to follow through an excavation. Part of a British issue gas mask. Found within the Hamster's Nest. As described by Kretz, the small timber built dugout was built on the Finnish side of the frontline, only some 100 meters from the enemy. Even though the inside of the dugout was only 4 square meters, it housed four Swedish volunteer soldiers, including Kretz himself. Thus, it was given the playful nickname Hamster's Nest. On one fateful night in September 1941, enemy activity was observed in no man's land in front of the Finnish trenches and the four men fr
Post a Comment
Location: Hanko, Suomi
Read more

Researching the Hanko Front, Part I

It was again time to head to the familiar city of Hanko, where we had conducted conflict archaeological research for the past few years. After finally finishing the excavations of the German transit camp at Cape Tulliniemi, it was time to continue with a new location. After the launch of Hanko 1941 research project, which concentrates on the material heritage of the Hanko Front, we had chosen to start the series of excavations from the Finnish side of the battlements. Finnish military shoulder button from a burned down dugout. In the Moscow Peace Treaty that ended the Winter War, Hanko was leased to the Soviet Union as a naval base. As the possibility of further battles loomed in the air, the Soviet troops fortified the peninsula with trenches, bunkers and multiple other underground constructions. As the Continuation War started in June 1941, the Hanko Front saw some skirmishes as well - as well as bloody battles for the control of surrounding islands. However, the situation did not l
Post a Comment
Location: Hanko, Suomi
Read more 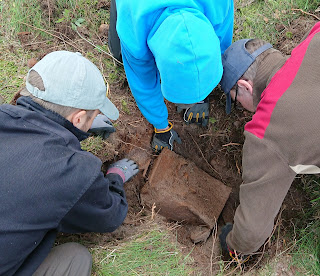 Feldluftpark Pori research team and Satakunta Museum are proud to announce the first public excavation of Feldluftpark Pori research project. This year the excavation is organized through Porin seudun kansalaisopisto ("Pori area adult education center") as a course centered around conflict archaeology and wartime history of Satakunta region. The course takes place in autumn with a programme as follows: Thu 27.8. 18-19.30 History of Pori airfield and Satakunta in war Tue 1.9. 18-19.30 Introduction to conflict archaeology Thu 3.9. 18-19.30 Archaeological methodology and techniques for excavations Sat-Sun 5.-6.9. 10-16 Excavation weekend 1 Sat-Sun 12.-13.9. 10-16 Excavation weekend 2 Tue 29.9. 18-19.30 Introduction to post-excavation work and finds Thu 1.10. 18-19.30 Latest results of the research project, plans for the future and comparisons to other wartime research sites Participants not able or willing to take part in the excavation can choose to take part solel
Post a Comment
Location: Pori, Finland
Read more
More posts